I’m a gardening dolt. I admit it. I know nothing about gardening and it shows. 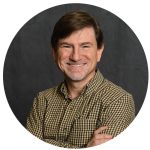 A weed is taking over my lawn. I don’t know what it is, but it’s been gaining ground for some years. I first saw it growing in my neighbor’s lawn before it spread into my adjoining grass on the high side of my driveway. Miraculously, it then jumped over the driveway and took root in my full lawn.

This didn’t worry me because I’ve purchased chemicals and I’m not afraid to use them. I confidently thought I’d just hit it with some herbicide and watch it die. But it didn’t. It browned a little, but it came right back. So I hit it again, hard. The weed died, as did the grass. Thankfully I didn’t spray my entire yard that thoroughly.

A year later, the weed was back and again I sprayed it. Again, to little prevail. I’ve tried herbicides that you spray with your garden hose and sprays that make you deliberately deliver their death by squeezing a trigger for each burst. I’ve tried the bags of weed and feed that you put in a drop spreader. Some years I’ve had a little success, but not as much as the weeds.

I’ve purchased chemicals and I’m not afraid to use them.

I have literally sat in the lawn pulling them out one by one. Did you know that if you soak the grass long enough, you can get most of the weeds without breaking their tenaciously long roots? There’s a certain satisfaction that comes with each root. But there must be hundreds of thousands of them. So I knew that I wasn’t going to solve the problem that way. I still know it. I still do it though, for that certain satisfaction and a sliver of hope.

Perhaps the best route would be to call a lawn service company that would treat my lawn throughout the year and kill off those weeds for me. So far, the cheap voice in my head refuses to bite that bullet.

Time often works against me. The weed and feed with crabgrass blocker is supposed to be used when the grass is growing and the temperatures are not yet in the mid-80s. That brief period often eludes me as I dodge between days of rain and days of endless appointments. So the crabgrass often gets its legs before the lawn gets its treatment. But crabgrass isn’t my main foe. This rough, thick little unidentified weed is.

Last summer I bought another herbicide but  when I read the instructions, I realized that I had again acted too late. You’re supposed to administer this wonder drug when everything is actively growing with temperatures routinely under 89°, but it was already hitting the mid 90s on a daily basis.

One reason I’ve let it get this far is because my lawn looks great as you drive by.

One reason why I’ve let it get this far is because my lawn looks great as you drive by. The weeds are the same green shade as the grass and you really don’t notice that they aren’t grass until you get really close up. So I haven’t been humiliated into making this my number one priority in life.

As I have already said, I don’t know anything about this stuff. But I suddenly got an idea, something so simple that I may be the only one who would need more than a few minutes to think of it. Perhaps the problem isn’t just the weeds but the grass. I almost never water the grass. I don’t think of it. By the time I realize the grass is prematurely brown, we’ve gone without significant rainfall for the last 60 days. Perhaps weeds do a lot better in dry spells than the grass does. So by letting the lawn go dry, I’m hurting the grass, which gives the weeds even greater advantage. This idea struck me after having read the outside of another weed and feed bag. It said something about giving your lawn a thick healthy grass that can combat the weeds.

I still don’t know about the lawn, but I can definitely see the application to my spiritual life.

There are some weeds in my life, some sins, that you may not see. Some are invisible unless you get up really, really close. That can lull me  into thinking there’s no need to rush into the process of eradicating them. But they are there, choking the life out of the good seed God has sewn in me and the weeds spread unchecked if I don’t act.

If I think I can eradicate sin from my life by spraying it with sermon videos and Christian radio, I’m going to be disappointed. If I try to pluck the sins out one by one, the roots are going to break off and regrow in no time unless I first soak the ground with the Living Water of the Holy Spirit. And I need to feed my spirit. I need to listen to sermons and spiritual songs, but I also need to read the Word for myself and to spend time in prayer.

Paul told us to “put off the old man,” the corrupt, sinful person whom we used to be, and to put on the “new man created in Christ Jesus.” We are to put off our old sins and put on new habits of righteousness. You can’t successfully put off the old sinful habits without putting on new godly ones. It’s the replacement principle. Nature abhors a vacuum, so when there is a low-pressure scenario nature tries to fill that vacuum from the higher pressure around it. If we don’t fill the vacuum left by our old sinful habits, our old nature will return and reclaim us. But if we fill that void with godly actions motivated and empowered by God in us, there is no room for the old sin to return. The weeds die when we water God’s ways and weed out the ways of sin. It takes both weed and feed to become the God-glorifying children He has created us to be.