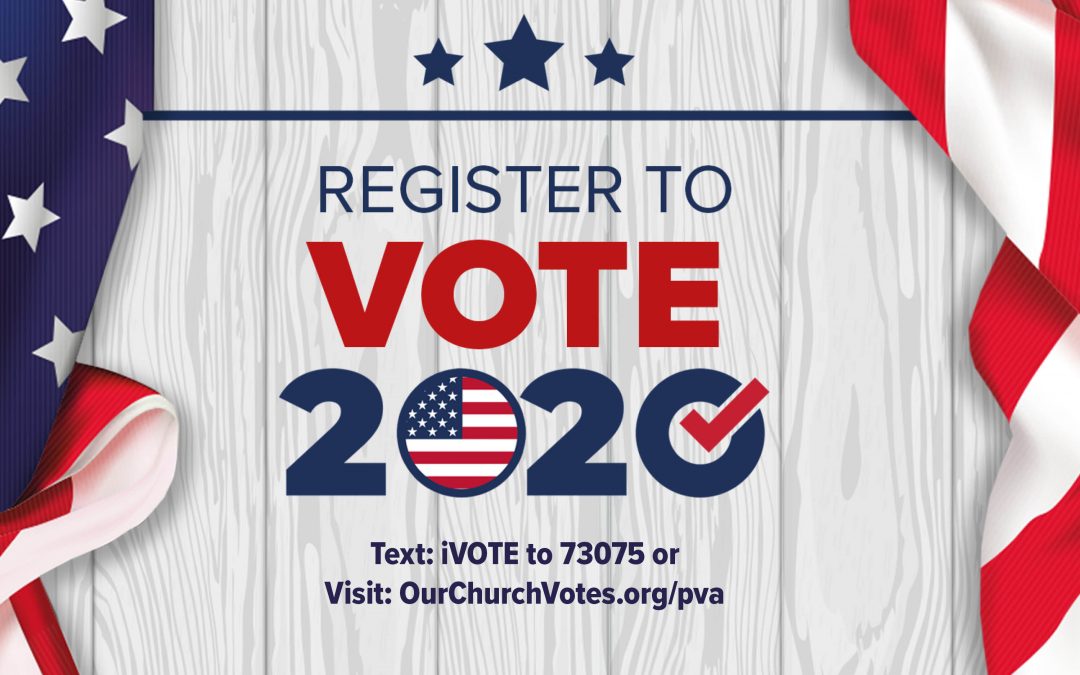 1. Please read and consider the below excerpt from Dr. James Dobson, from his Family Time newsletter, on voting in 2020. [For his full newsletter, click here.]

2. You can find a comparison of the Democratic and Republican platforms here.

“I plead with you to register and vote in this presidential election. I won’t try to tell you who to vote for because you can figure it out for yourselves. But I will suggest how you might evaluate the situation we face. I’ll close with seven critical issues that have stunning significance for the nation. Please think hard about them, and then go to the polls.

There is a fierce battle being waged now in the nation’s classrooms for the hearts and souls of our children and grandchildren. Those of us who are passionately committed to the Judeo-Christian system of beliefs are losing our kids right before our eyes. They are being force-fed a radical curriculum that is godless, anti-American, and sexually perverse. Make no mistake, the left and secular culture are manipulating the minds of your sons and daughters every day of the year. I urge you to be extremely careful about those whom you set in power over your children. Protect them with your very lives.

2. The Sanctity of Human Life

All life is sacred and is a gift from Almighty God. But as you know, America has the blood of innocents on its hands. Since 1973, more than 60 million babies have been murdered through abortion and countless lives have ended by euthanasia. This is the most tragic holocaust in the history of the world! Some states have even passed laws allowing wounded and suffering infants to lie alone on porcelain trays after somehow surviving unsuccessful abortions. They will die without the comfort of their mothers’ breasts. If that doesn’t touch your heart, you are without compassion. I hope you will not cast a single vote for any politician who supports such wickedness.

The family is God’s original building block for society. Marriage continues to serve as the foundation for every dimension of human life. Everything of value rests on it, including procreation and the care and training of children. If that ground floor is weakened or undermined, the entire superstructure of civil society will come crashing down. But listen carefully: powerful and highly funded forces, including LGBTQ and other leftist entities, are determined to destroy the family as an institution. It is already on its knees, and its future is grim. Before you vote, find out what position the candidates have taken on this issue. Then vote accordingly.

The first item listed in the Bill of Rights addresses the issue of religious liberty. All the other enumerated rights flow from that fundamental freedom. That is why it is alarming to recognize that this right to worship and honor God as we choose is under vicious attack today. The courts have done the greatest damage, but now an entire sub-culture is trying to bring down the Christian faith. Whether it has invaded your private world or not, it is at your front door. It was this primary concern that led to the Declaration of Independence and the Revolutionary War in 1776. We can’t compromise one jot or tittle within that fundamental right. Fight for it with every ounce of your strength and determination. Don’t let the government close the doors of your church or tell you when you can sing praises to the Lord Almighty. They have a devious agenda, and it is dangerous. Be ready to go to the mat in defense of what you believe. And let this passion influence how you cast your ballot in November. Here I stand. Will you join me?

It is difficult to believe that for the first time in American history, our nation appears to be thinking about trading our democratic way of life for the tyranny of socialism. I can hardly catch my breath. Could we really consider abandoning the beloved system of government that was designed to be of the people, by the people, and for the people? Is it true that up to 40 percent of millennials and others are prepared to surrender their liberties in exchange for the absolute authority of the state? Democracy and capitalism have made ours the most powerful and successful nation in the history of the world. Are we really considering scuttling the system that has served us for 244 years in exchange for what some people call “free stuff?” I pray not! But that option awaits you in the polling booth.

Given recent rulings, we know that judicial overreach has almost ruined this great nation. Justices and judges are constitutionally charged to interpret the law, not make law. But again, and again, they have overstepped their authority and brought us atrocities such as abortion on demand, same-sex marriage, and the so-called “separation of church and state,” which doesn’t appear in the Constitution. Most recently, the Supreme Court handed down one of its most egregious rulings since Roe v. Wade. It is the case of Bostock v. Clayton County. This decision was not based on constitutional law but on the whims of six justices. It created a new legal definition of sex out of thin air. Lawyers tell us that this ruling will affect every dimension of culture and haunt the nation as long as it endures. Please don’t vote for politicians who will expand, rather than limit, the power of the judiciary.

7. The Nation of Israel

Scripture tells that those who bless Israel will be blessed (Genesis 12:3). Our prayer is that the next Chief Executive Officer of the U.S. will continue to promote and cultivate a vibrant bond of friendship with the nation of Israel, which is our only ally in the Middle East. Anti-Semitism and all forms of racial discrimination are inherently evil, and we condemn them categorically. We are a nation that is dedicated to “freedom and justice for all” (The U.S. Pledge of Allegiance).